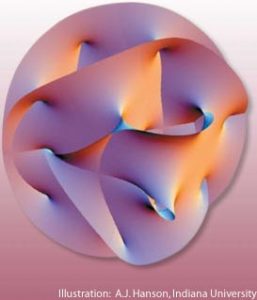 String theory addresses one of the deepest problems of contemporary physics, namely the reconciliation of gravity and quantum theory. It regularizes quantum gravity, provides a perturbative expansion in the regime of small gravitational coupling, and unifies the gravitational force with the forces of the standard model of elementary particle physics. String dualities lead to non-perturbative formulations of gauge theory and quantum gravity. As a consequence, black holes have been successfully treated as quantum objects and serious efforts are made toward a theory of quantum cosmology. The formulation of quantum gravity requires a similar change of physical and mathematical concepts as the development of quantum mechanics. This sparked an intense interaction between physicists and mathematicians that led to substantial contributions to both fields. This cluster focuses talents and resources of the UW-Madison mathematics and physics departments on this great endeavor of theoretical physics. The cluster and affiliated faculty cover the field from mathematical aspects of string theory to string cosmology and string phenomenology.

The String Theory research program began as part of the University of Wisconsin Cluster Hiring Initiative on Mathematical Physics. Since then, the scope of this research program has grown resulting in the formation of the Theoretical and Computational Cosmology Group and the AI ∩ Universe Initiative. Members of our group interact synergistically with other groups of the High Energy Physics program at UW-Madison. We also organize weekly seminars jointly with the Phenomenology Group.